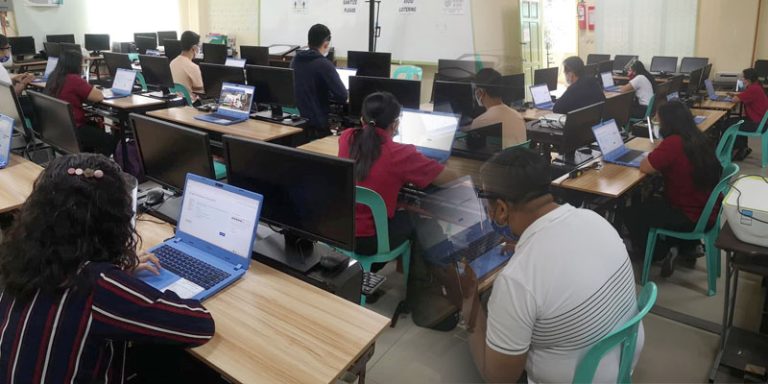 The Schools Division of Pasay, true to its battle cry “Kapit-kamay, tuloy ang Edukasyon sa Pasay”, has continued with hiring of new teachers to provide quality education for batang Pasayenos in the emergence of education in the new normal, through the administration of Computer-based English Proficiency Test (CBT-EPT) for Teacher Applicants.

Around sixty (60) secondary schools teacher-applicants took the CBT-EPT which was held on March 9, 11, and 13 at the Pasay City West High School, the designated testing center of SDO-Pasay for the administration of computer-based testing.

With the country placed under a state of emergency last year, the Bureau of Education Assessment (BEA) has pushed for the administration of CBT-EPT in the Schools Division Offices (SDO’s) to ensure continuity of hiring of teachers. SDO – Pasay promptly respond to this call by preparing clear-cut plans for the administration of CBT-EPT under the guidance of Schools Division Superintendent, Dr. Loreta B. Torrecampo.

On the administration of CBT-EPT, the testing materials are available on the scheduled date and time of the test through the installed application. There is less contact as test takers no longer use test booklets and other forms that were utilized in the paper-and pencil version of EPT.  Another great advantage of CBT-EPT is that results are readily available after two (2) working days since the responses are automatically forwarded to the Central Office once the test takers submitted their tests online.

Ms. Flerida S. Pajarillaga, Division Testing Coordinator, and Mr. Erick D. Comia, Division IT Officer, collaboratively worked in spearheading the introduction of CBT-EPT in the division. They partnered also with Mr. Peter R. Cannon Jr. and the ICT Team of Pasay City West High School (PCWHS) to respond to the unique needs of computer-based testing. In fact, SDO Personnel worked hand in hand with teachers and staff of PCWHS who served as room examiners and testing staff.

Moreover, the Division Medical Officer III, Dr. Maria Recelle G. Enriquez-Reyes, also made sure that the health protocols mandated by the COVID-19 Inter-agency Task Force (IATF) for the Management of Emerging Infectious Diseases were strictly followed.

In line with this, Pasay City West High School even launched their Project QR which played significant role during the testing days. Contact tracing forms filled up by the test takers at the school gate were accessible via QR code. For those who did not have QR code reader installed in their mobile phones, computer units were prepared to make filling up possible for them.

Project QR of PCWHS shall continue with its implementation according to their school head, Mr. Cannon. The project shall benefit the school which continues to receive quite a number people for distribution and retrieval of modules, as a vaccination center, among other transactions which require face-to-face conduct.

These technology-assisted administration of EPT has once again proved SDO-Pasay’s commitment to deliver quality education and services despite the odds.