The 34 athletes from Public and Special Schools in Pasay City qualified for the Palarong Pambansa to be held on April 27-May 1 2019 in Davao City. The qualifiers rose from the rank of the pool of athletes from the 16 divisions who participated in the Palarong Pangrehiyon held in Marikina on February 24-March 1, continue reading : 34 SDO PASAY ATHLETES QUALIFIED FOR PALARONG PAMBANSA 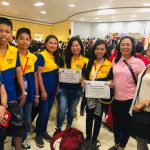